She’sAHomewrecker on the Bethenny Show

Yesterday I happened to catch the segment on the Bethenny Frankel talk show that discussed the site She’sAHomewrecker. It featured the owner of the site and two women who have posted to it after their partners had affairs, and a woman who had been named on the site as a ‘homewrecker’.

Part of the discussion had apparently been edited out, but what was left was saddening.

To be clear: This site does not support, vindicate, or excuse the affair partner for their knowing participation in an affair, but neither do we support the wholesale blame for an affair on the other person.

The affair partner is complicit in the harm and detriment caused to the faithful partner. He or she may well be predatory, amoral, destructive, and just plain revolting … but it doesn’t make them the person who enabled, chose, and engineered the assault on the family and relationship the cheater already had. The CHEATER was the only person with the power to do this; the affair partner was just there cheering them along.

The affair partner isn’t the homewrecker - the CHEATER is.

The show centered on a view opposing the concept of the She’sAHomewrecker site, exploring the negative aspects to all involved in public shaming of this nature.

The woman who had been posted on the site as a homewrecker asserted that the information there about her was inaccurate, and that her life was being negatively affected by the inaccurate portrayal of events by the cheater’s wife. It’s a valid point that the stories on the site may not be accurate, and that it could be easy to fall prey to someone deliberately posting malicious misinformation about someone.

As the site owner said, this is the same type of criticism that applies to many social media websites. If details of your life become a matter of public record there should of course be a process to get them removed. However, it’s probably safe to say that while there may be inaccuracies in some of the stories posted on the site, it’s probable that (hyperbole aside) a substantial number of stories are largely accurate.

The issue of public shaming is an interesting one.

The level of shame and embarrassment felt by the faithful partner when their cheater’s affair is discovered and exposed can be acutely destructive. Affairs can be entirely humiliating, they can affect financial security, job security, reputation and self-esteem.

It seems somewhat unfair that the other woman (or man) expects the right to not endure the consequences of shame and humiliation, when their choices and actions colluded to bring the same upon the cheater’s wife (or husband).

Ladies who play with fire must remember that smoke gets in their eyes.

Yes, during an affair there are often competitive and vicious elements to the affair partner’s behavior (particularly in women in seems), and there are undoubtedly those who do seek or participate in an affair with the primary intent of causing the spouse harm. In reality though, many affair partners are as equally self-absorbed as the cheater they’re involved with, and only tend to see the spouse as an obstacle and a threat when the affair is long-term and has been fueled by promises of a future with the cheater.

The spouse is often just collateral damage to both the cheater and the affair partner - it’s not personal. In posting the details of the other person to the She’sAHomewrecker site (or others who similarly ‘out’ the affair partner) it is clear, deliberate and targeted. It smacks of vengeance and wrath and retribution. It is understandably personal.

These stories are posted by people who have been hurt and devastated, lashing out at someone who contributed to that harm to them. Maybe they see it as an accessible and cathartic way to exact some redress for the other woman’s part in causing them pain. 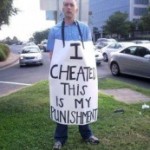 Notwithstanding the responsibility of the affair partner, all roads do lead back to the issue of the cheater: Why is the cheater so notably absent in the public shaming? It is the cheater who is at fault, so why are they not the ones whose personal details, intimate photographs, and sordid stories are splattered all over the internet for all to see?

Perhaps the take-home message here is a cautionary one, based on the inherent nature of a cheater: Having an affair is a selfish and entitled choice that disregards the potential damage it could do to others.

It’s short-sighted and foolish to get involved with a cheater with the expectation that you should somehow be exempt from potential damage.

Whilst rational thinking should conclude that the affair partner is a low-value target, so many faithful partners spend considerable amounts of time and energy focusing on them. Spending your time criticizing the way the other person looks and behaves not only saps you of emotional energy that is hard to recoup, but it is founded in a basic misunderstanding of the nature of affairs.

Many cheaters ‘affair down’. She’sAHomewrecker demonstrates quite clearly that the other woman isn’t necessarily a ‘better model’ than the wife; affairs are not about the attractiveness, size, shape, color of the other person.

The cheater didn’t cheat because the other woman was inordinately special. Cheaters cheat with people who are open to having a relationship with someone already in a committed relationship. The people who willingly enter into relationships with someone ostensibly unavailable are not better than the faithful spouse; they’re new, available, and willing to be a dirty secret.

The Bethenny show audience who made comments that blamed the faithful partner, the relationship, or not ‘keeping your man happy enough’ are buying into uninformed but pervasive notions about infidelity. It’s not stupid or a failure to believe that your partner will honor their commitment of fidelity. Trust is not a ‘disorder’ to be derided.

An unhappy or imperfect relationship is not the cause of infidelity. Infidelity causes infidelity. Personal narrative and world view sanction the cheater’s internal justifications to have an affair. The faithful spouse has very little influence or control over the cheater’s rationalizations to cheat.

There is very little recourse for a faithful partner in today’s society with the abolition (or lack of teeth) of most adultery and alienation of affection laws. Even if divorce is the outcome after an affair, it doesn’t deliver any measure of justice or recompense for the harm, pain and upset that an affair (and its attendant behaviors) inflicts.

Justice will not be served until those who are unaffected are as outraged as those who are.
~ Benjamin Franklin

The affair couple have deliberately chosen selfish behaviors that have harmed other people. Affairs make people angry. They change people. They are painful, and there are very few outlets for that pain. Without some form of societal justice for the faithful spouse, many see the only available alternative as personal vengeance.

Whilst it is far loftier to take the position that revenge solves nothing and corrects nothing, is it any more righteous to blame and criticize a betrayed spouse for reacting to an onslaught to their lives that they did not invite and over which they had no control?

The satisfaction that might be had by posting details to the She’sAHomewrecker site is probably short-lived. The site is a conduit for venting and expressing outrage and disgust. It’s an understandable reaction, but other support might help move the faithful spouses out of the mire. Support sites that focus more on positive personal outcomes after an affair than trashing the other woman might be a better option.

In the wake of an affair, the only productive use of your energy is to invest it in yourself. Regardless of the outcome of your relationship after the affair, you have to live with yourself. Redirect the anger, pain, and humiliation into redefining your own life and working towards your own goals.

Whilst the women who appeared on the Bethenny show might not have been received sympathetically by the audience, they were clearly angry and hurting. Unfortunately their upset was expressed in terms that seemed detrimental to their agenda, and the show did seem to raise valid issues. What it failed to do however, was portray how these women’s lives were so severely impacted by the actions of both their cheater, and the other woman.

I may not share the views and opinions of the women on the show, but I do extend my sympathy and support for them in this difficult period of their lives.