The 10 Commandments of Being a Good Affair Partner

It’s not well known, but there is a code of sorts when it comes to those who are indulging in extramarital affairs. Whatever reason that people cheat, it is thought that perhaps they are people with looser morals rather than considering the fact that they simply may have different morals than the ones which you would be expecting. To be a good affair partner relies on more than looks and sexual technique. People who have chosen the path of adultery often to not step onto it lightly and so we have a few iron clad rules that will make you an amazing affair partner who not only meets people to sleep with, but makes the connections which may have been missing in your life. These ten commandments 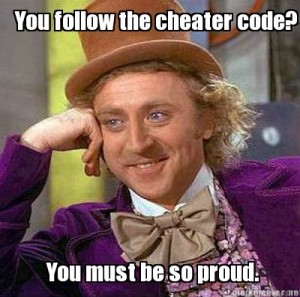 have been cobbled together through feedback that we have garnered from our members through emails and telephone calls.

Everyone who has made this decision is doing so because they are looking to find something better in their lives and because they need a break. Your affair partner is as essential to you as you are to them and as such, respect them. They are offering up a piece of themselves to you and are making choices as grown adults that you can not only emphasize with, but understand completely. The people who choose to have affairs are generally not bad people and if you go into this with a negative stigma about cheaters, you will denigrate your affair partners and ruin your chances. Plus, that negativity will seep into your perception of yourself even if it’s only on a subconscious level.

2. Do not insult the family or spouse of your affair partner.

Leave the families out of this. While families are often connected to a person’s decision to cheat, they have nothing to do with you and should have nothing to do with you. It’s fine to emphasize with your affair partner about their spouse or their children, but it’s not your place to pass judgement on their family as you do not intimately know the situation that they are in. Even if it seems like your affair partner is inviting you to insult their family, it is best not to cross that boundary and keep any opinions you may have to yourself. You probably wouldn’t want them insulting your family, so be respectful of theirs.

When a person has an affair they are opening themselves up to you. The closer you become to an affair partner, the more that an intimate knowledge of them is presented to you. While it can be nice to brag to friends (who are discreet) about the affair that you’ve had, keep in mind that there are things that your affair partner has told you in confidence and as such, does not want to be spread around. Even if you believe what you’re saying is harmless, remember that someone has trusted you with a huge decision that they’ve made in their life.

4. Do not bring negativity.

Smile and the world smiles with you, right? Something similar is true of affairs where what you put out into the world is what gets returned to you. If you are consistently negative about your life, your affairs and your prospects, then you are going to scare away any people who are optimistic and more light-hearted about their lives. When you give off a negative vibe, people are able to pick up on it and you will attract people who do not make you happy simply because of the way that you view the world. If everything is negative rather than positive, then you aren’t going to find the release that you’re looking for in an affair since you will be too weighed down by your own negativity.

Having an affair means putting yourself out there. This is particularly true of those who have been married for a long time. Getting back into the dating game can be hard and judgements will only make it harder. It can be hard sometimes not to scrutinize the people you associate with, but try not to make judgements on those you are having affairs with. They are generally trying to make an earnest try at something new and with as much stress as they must have on their plate, the last thing they need is further judgement.

6. Be supportive within reason. There aren’t many people who would want a second mother or father that they could also sleep with, but sometimes just knowing that there’s someone who will want to listen to their problems is enough for people who are trapped in marriages. If you can be a quiet support for the people you are having an affair with, this will be more than enough. Keeping a positive attitude also goes a long way to help you be supportive to someone’s moods without even realizing that you’re doing so.

The key to a successful affair is discretion. While we are not advising that you sneak around the city like you’re in a James Bond film, you’re also not going to get much traction by being obvious or obtuse about your affairs. Protecting your partner is a great way to also protect yourself and it is recommended that those who are looking to cheat think hard about how they’re going to balance their responsibilities with their affairs and also how to hide their affairs from their families.

8. Do not saddle your affair partner with your baggage.

While being supportive is a great thing, no one wants to have all of your problems dumped onto them. There is nothing sexy, fun or relaxing about having to listen to your spouse complain about all the problems your family has to listening to your affair partner complain about all the problems their family has. While it is fine to share your problems and have someone else share the burden with you, it never hurts to ask if what you’re doing is okay and if your partner says no, then respect that.

9. Treat your affair partner as you would want to be treated.

This is the golden rule or would be if number ten didn’t knock it out of the water. It’s such a simple rule which is passed down to us as children and yet, during times of stress it’s something that people have a tendency to forget. There is little that that this rule does not apply to and by treating your partners the way that you want them to treat you, you’re going to find that you are naturally having more positive experiences both on the site and off.

The true golden rule not just for those who are having affairs, but for everybody. If you are unable to love yourself, then it is harder for other people to love you. People who love themselves are able to be positive about themselves as people and project their best attributes. While this doesn’t mean that you need to love every part of yourself (we’ll settle for a majority in this case), loving yourself is an important tool not just in affairs, but in life. Love yourself is a rule which ties into all other rules and holds them all together as a person who is able to be kind to themselves can also be kind to others, if you can be understanding with your own faults then you can also be understanding when it comes to the faults of others. A lot of times when people are seeking out affairs, it is to find something which is missing in their life and to feel better about themselves. Just keep in mind that not all of those good feelings are going to be external and by looking inside of yourself and finding something to love, even if it’s just one thing, you’ll be a lot happier.

If you’re not vomiting into your waste paper basket right about now, we have ‘decoded’ this codswallop in this post: The Cheater Code Deciphered.